The Great Barrier Reef is famous for clown fish. To ABC Snorkel Charters Port Douglas, they are like old friends whom we see most days! They are also known as Anemone Fish, because they are found living only in the tentacles of the Anemone, in a happy relationship called symbiosis.

Some of you will also be familiar with the 2003 cartoon animation “Finding Nemo” where Marlin, a “Common Anemonefish” goes looking for his lost son “Nemo” and finds him in Sydney Harbour. Unfortunately, little Nemo is not actually found around Sydney, as it’s too cold. Nemo and his other clown fish cousins are actually found in warmer waters, such as the Great Barrier Reef.

Living amongst the stinging tentacles of the anemone, the Clown Fish are protected from many predators who dare not get too close for fear of being stung. Clown Fish cleverly use a special mucus layer over their body to make them immune to the stinging cells of the Anemone. It is believed it fools the Anemone into thinking it is touching itself and so prevents them being stung. The symbiotic relationship between fish and anemone is highly beneficial to both. The Anemone provides a safe haven for the Clown Fish to live, and in return, this fish provides several services to the Anemone. This includes cleaning away parasites and debris, scaring away potential Anemone predators, providing better circulation of water as it swims around and potentially luring in fish as prey for the Anemone.

These fish can be territorial and their family structure is based on a strict hierarchy. When we look at a family of Clown Fish in an Anemone, we usually see a large individual which is the dominant female. All the other family members are male and when the domineering female dies, the largest male will change into a female. This is possible as Clown Fish are hermaphrodites, being born with both male and female reproductive organs. This is a most clever strategy, as it allows the Anemone Fish family to prosper without having to leave the safe haven of their Anemone host, to look for a potential mate.

Clown Fish breeding involves courtship behavior between the male and female, which includes chasing, biting and visual cues such as fin extensions. The female can produce up to 1,000 eggs, which are stuck to the side of dead coral next to the anemone. It takes about 5 days for the eggs to hatch and during this time, the male Clown Fish will guard the eggs until ready. Once hatched the larval fish will drift in the ocean for approximately 2 weeks, before settling down in an Anemone, which could be on a completely different reef. 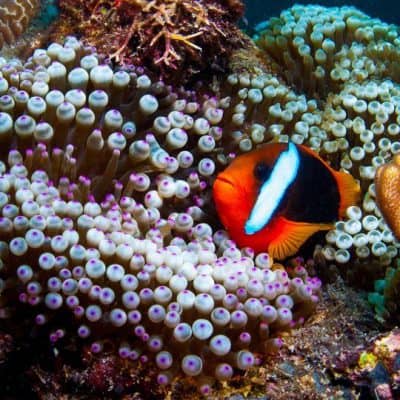 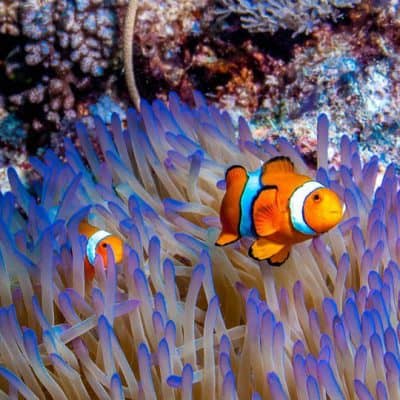